It was hard to think back to a time before they came. Before they descended from the sky in their chariots of fire and scorched the earth.

No one knew exactly where they came from or what had driven them here. But ever since they had arrived, everything had changed.

At first they seemed content to live on their palace in the sky, a golden space ship they called Olympus, that rested on the summit of Mount Hermon. But that was only the calm before the storm.

No one dared venture too close and no one challenged them. The chieftains of the tribes of men propagated that if left alone, the aliens would leave.

But that was merely the voice of cowardice. It was the voice of fear. The voice of those who had been seduced by promises of power & priviledge, in the new order that was to come. 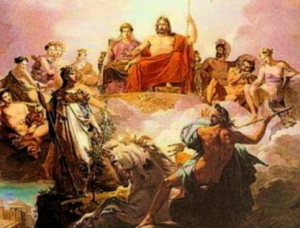 Eventually the visitors emerged and began to subjugate the population.

They where ruthless. They killed those that resisted & enslaved the rest. The males were sent to work in what they called “The Mines” & the women were used for breeding purposes.

Soon their hybrid offspring, “The Arayans” as they called themselves, became a population. A new “race”. In fact, it was probably their plan to eradicate the Sapiens entirely, by polluting their dna until all that remained was their “Perfect Arayan Race”.

And they would have succeeded too… if the sky hadnt cracked open. All had seemed lost until the other Seraphim had emerged out of thin air. 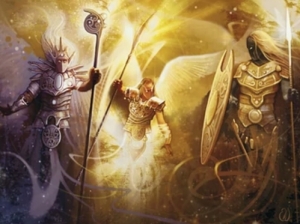 A great war ensued that scorched the earth. The seas were raised & mountains erupted. Eventually they destroyed Olympus & put their fallen comrades in irons. They then cast them into the void & destroyed the Arayan City, Atlantis.

It should have been a decisive victory… except the damage was already done. The Sapiens were fractured. The descendants of the Olympians were in control.

They altered the history books. They destroyed the cultures & kingdoms of the Sapiens. They dug & extracted. Transmuted & conjured. Abused & oppressed. Even as the sun scorcher their skin & drove them towards the the edge of the world.

Indeed it was hard to think back to a time before they came. Before they descended from the sky in their chariots of fire and scorched the earth… but it was not impossible. And all one really needs is a single light, to illuminate the darkness.

2 thoughts on “The Day The Sky Cracked Open”